Have you ever received a check that was so large you couldn't cash it via mobile?

How about receiving an unexpected check in the mail?

Have you received clients who come to you, ready to pay in full and in a hurry?

Do you want to?

I remember when things used to feel so hard.

When the quote "the struggle is real" was my everyday normal.

I kept looking around and EVERYONE else seemed to be winning...

They were getting jobs while I was still sending resumes.

They were getting sales while I was still trying to get my brand new blog off the ground.

They were getting the success that I wanted.

I always heard "ask and you shall receive" but it seemed like my asking wasn't getting me anywhere.

I started receiving dates from left and right.
And then I received a date from the man who would become my husband.

I started receiving phone calls from brands ready to pay thousands to work with me.

I started receiving large checks, so large that I had to go to a branch location to deposit it.

I started receiving clients on repeat, clients who were ready to pay in full, excited to go and willing to put in the work.

Why do I keep using the word RECEIVE?

Because that's the light switch.

That's the switch that flipped.

I realized that there was a key difference inside of me that made me RESISTANT to receiving.

(I realized that it was especially hard for me because I'm a woman.)

And no matter how much I asked for more, nothing seemed to go right.

But I didn't give up.

So I kept searching.

I don't know why I never shared this before...

But I guess it's because it's a little WOO.
It's certainly not as concrete as "set up this funnel and you'll get clients."
Because it's the deeper inner work.

It's the work that makes all of those funnels actually turn into booked clients.

It's the work that allows you to have simple conversations and bring in cash on repeat.

It's the work that allows you to release the struggle.

It's the work that your parents likely didn't teach you.

It's the work that society ignores.

But you want to know who doesn't ignore it?

And it's as simple as being... 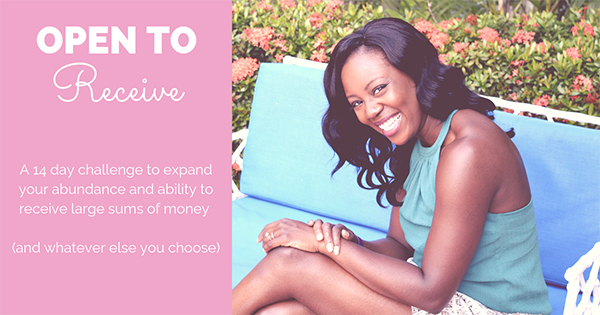 Which would you rather say?

"My cup runneth over"
Or
"The struggle is real"

During this 14 day challenge I'm going to take you through daily prompts to increase your ability to receive.

The same steps that I took to start receiving all the good things I knew were coming to me.

The same steps that I took to stop being broke, create a business that makes five-figure months on repeat, and completely up-level my friend circle.

The same steps that I took to quit the addiction to broke and finally allow in the wealth that was granted to me from birth.

The time is now.
It's only ever now.

What They Said About It 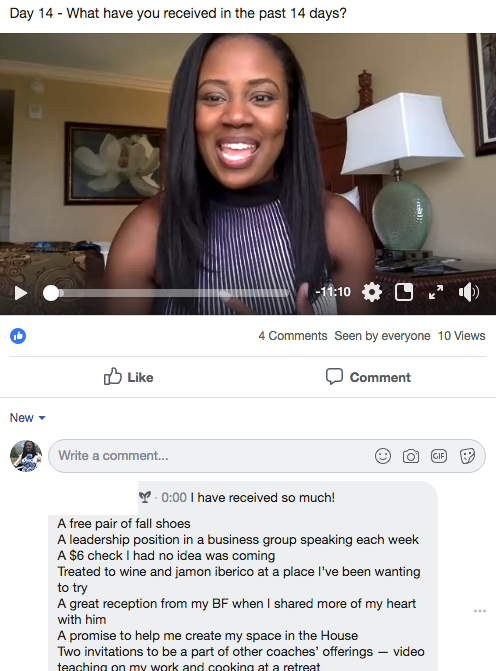 Here are a few messages I've gotten over the past few months.
When I first started my business, I would have gotten frustrated about them, but now these types of messages don't even phase me.

There are several variations of the same message but they all boil down to one core belief.

Lying underneath those types of messages is a disbelief in yourself. Because 9 times out of 10 the action doesn't follow the words.

As I said earlier, I used to get frustrated with those people, thinking, "Why didn't they do what they said they were going to do?"

I would follow up sometimes, thinking that they just needed a reminder.

Then I realized a pattern.
For every person who got a reminder and did take action, they either stopped doing the work, or came up with excuse after excuse as to why they couldn't get it done.


That's when I realized, I'm not here to teach broke people how to not be broke.

There's a personal journey that has to happen.

The same way that you can't force someone to eat healthy, lose weight, stop over spending, etc.


Unless there's a personal decision backed by daily action, none of those drastic changes will stick.

Did you know that deciding to make more money is just like deciding to lose weight? Or quit cigarettes?

Our brain works in the same way.

Once I realized that, I changed my messaging.
I stopped trying to "save" people.

Once I did that I stopped caring when someone said, "I'm going to invest on Friday." because I immediately saw them for who they really are.

(I usually reply back with ok and sometimes no reply at all – or even just a thumbs up.)

Because I am not here to teach broke people how not to be broke.

Broke is a mindset. One that is tied to struggle.

I'd rather focus on those who take immediate action. Because I know they will be successful.

Are you ready to quit the struggle and just receive what you want?
Or are you addicted to the struggle?

You don't have to struggle.

P.S. If you're joining this program, you're going to LOVE the additional support.

As you implement or if you have questions from the trainings (for example, if you missed the live version) then you won't feel left behind.

You'll join us in the private student group so you can share your wins, get peer support, and additional help.

I just want to make sure you have everything you need to finally create and fill your coaching program.